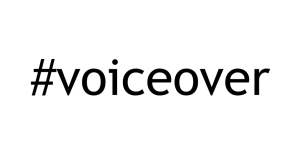 There has been some potentially BIG NEWS for the voice over world, especially voice over talent (in my hopeful opinion). Facebook just announced that it is rolling out the use of searchable hashtags much like Twitter has been using for years.

For those of you not using Twitter (I sure hope you are and you can follow me here), hashtags allow you to group tweets under certain topics or conversations. All you do is put the pound symbol before a word or phrase and that groups the tweet. For example, people tweeting about the NBA finals use #NBAFinals after their tweets so others tweeting about the same thing can search and view tweets about the same thing.

Update:  It is ACTIVE for some Facebook users. I was able to click on some hashtags on my newsfeed and see where it brought me. Someone used the #voiceover hashtag, and now it works. Read on a little more in this post to see how it works.

Here’s a screen shot of what it looks like when I look at the “Top Tweets” for me when I search #voiceover on Twitter: 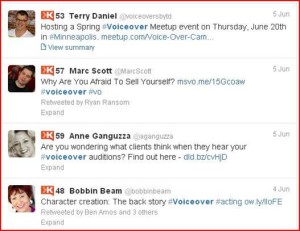 As you can see (after you squint or click on the picture), it groups the tweets nicely so I can find tweets about #voiceover immediately. So… to Facebook’s hashtags…

So in Facebook, go to the search bar, and type in whatever word you want after the hashtag. Here, I’ve typed in #voiceover. (Click on the image to enlarge it.)

And this is a screen shot of what I see after I click it. (Click on the image to enlarge it.) 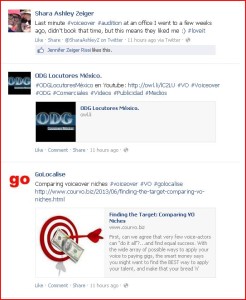 As you can see, it brings up all sorts of posts that use the #voiceover hashtag.

5 Ways Searchable Facebook Hashtags Could Be HUGE for Voice Over:

1. Voice Over Questions Can Get Fast Answers

With the ability to group conversations with hashtags, voice over talent could ask questions regarding technology, finding voice over coaches, or anything else with which they may have a question.

#VoiceoverEditing – for any editing questions

#VOCoach – for any comments or questions regarding VO coaching

#VOQuestion – for any general VO questions

Instead of combing through hundreds of voice over business pages, voice seekers could be able to search out specific hashtags to find the right talent for their projects. All voice over talent would have to do is use these hashtags within their posts. We would just need to spread the word to voice seekers…

On Twitter, I have often used it to search out specific keywords and hashtags to find potential prospects and clients. Voice talent could do the same thing on Faebook.  If we spread the word to video production companies, ad agencies, etc., voice over talent could comb through Facebook posts using any of the above hashtags or any of the ideas I wrote below. This is more of my own dream, but it could open up some doors to help us more effectively monetize our activity on Facebook.

^Any of the hashtags listed above^ 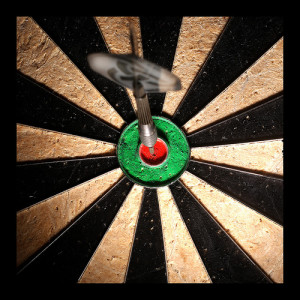 For those using Facebook ads in their marketing efforts, this could allow voice over talent to focus their ads on people using certain hashtags. An advantage Facebook has over Twitter is targeted marketing. This can make the marketing even more pinpointed by going after powerful hashtags like #videomarketing or #videoadvertising for voice over talent who use targeted ads.

Facebook is all about images. This could lend itself to some awesome event curation or social media streams. Dave Courvoisier and Derek Chappell curated the happenings at FaffCamp this year by compiling all the tweets using the #FaffCamp hashtag. For Facebook, we can curate images and posts into a searchable stream through the Facebook hashtags (hopefully). This allows those who can’t make it to enjoy the fun and potentially useful blog posts related to the events.

I truly think this could be a game changer for voice over talent and voice seekers trying to connect and do business on social media. Twitter has been more useful than Facebook in finding prospects and clients in my experience, but this is definitely a step in the right direction for Facebook. Here’s another take on how the incorporation of hashtags in Facebook affects social media marketing: http://www.ignitesocialmedia.com/facebook-marketing/facebook-hashtags-for-brands/.

Before you answer my next question, I have a favor to ask…

I’ve put out a survey on what everyone in the VO community calls themselves (voice over talent, voice actor, etc.). I want to know what YOU call yourself. Please fill out this very brief survey by clicking on this link => http://www.surveymonkey.com/s/2G6CK9T. Share it with other VO people so we can get a really big sample size. I will be sharing the results soon.

So, what are other ways the voice over community could use the new Facebook hashtags? Please share your opinion.

p.s. If you like this insight and don’t want to miss the survey results, be sure to subscribe in the upper right corner of this page so you don’t miss future posts.

9 Comments on “5 Predictions: How Facebook Hashtags Could Be HUGE For Voice Over”