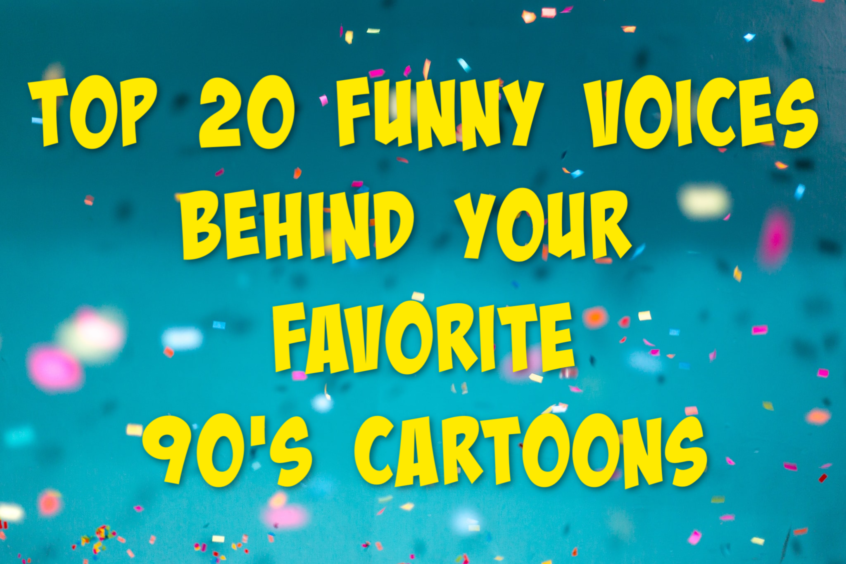 Did you love cartoons when you were a kid?

My favorite part was the funny voices of the characters. Some voices were not only funny at times but also just straight up cool.

You see… I grew up in the 90’s, and now that I’m a full-time voice actor and voice over talent, I’ve come to realize that there are actual PEOPLE behind those awesome characters and funny voices (many of those people voicing multiple characters in the same show).

But WHO are the real people behind those funny voices?

That’s why I decided to research and write this post.

To give a face and name to the people behind these funny voices and characters.

But before we dive in…

Are you interested in figuring out how to become a voice actor yourself?

If so, I strongly suggest heading over to my voice over career advice website where I give you actionable advice on how to grow a successful and sustainable career in voice over.

Here’s a video going over the 7 pillars of a successful pro voice over career:

Back to the funny voices we were talking about.

I did my best to find interviews of them talking about their careers, why they got into voice acting, as well as some live-action examples of their work.

And yes, I know that these people have done A LOT of stuff since the 90’s or even before the 90’s and that 20 voices isn’t nearly enough to give full credit to all the other wonderfully talented voice actors out there. (I hope to highlight some more names in future blog posts.)

Unfortunately, not all of them have good interview videos readily available online, so some of them just have clips from some of those awesome cartoons.

Dang…we have to watch some cartoons…

(Side note: My primary focus in my voice over work right now is in the commercial realm (TV and radio ads, in-show narration, corporate videos, explainer videos, etc.).  Feel free to check out my voice over portfolio here. One day, I hope to focus more on animation work, but until then, join me in living vicariously through these legends.)

In no particular order, enjoy this blast from the cartoon past!

Charles discusses the many characters he has voiced.

Townsend interviewed about his voice acting career and how he got into it, including his work in TV promos

Kath and her fellow “Rugrats” voice cast discuss their characters.

13. Christine Cavanaugh – Dexter (Dexter’s Laboratory), Chuckie Finster (Rugrats) and more – Sadly, Christine passed away in 2014. She was SO talented.

Someone made a really cool tribute to her voice and career.

Keith voicing Goliath and many of his other great roles

8. Jess Harnell – Wakko Warner (Animaniacs), Fatso (The Spooktacular New Adventures of Casper), Sewer Urchin (The Tick) and various voices on Pinky and the Brain, Recess, Cow and Chicken, and many more

This is amazing. Who knew one person could make such a realistic lion roar?

Compilation of many of her legendary voices over the years

These videos are the best. Here’s Nancy Cartwright, the legend herself, voicing all of her Simpsons characters.

Who is your favorite funny cartoon voice actor? Comment below.

Be sure to hop over to my VO career advice website: