One of the hot button topics in the VO community is this:

What do we call ourselves?

What is our job title?

Recently, I posed this question in a Facebook VO group called Voice-Over Friends:

I posed it from the non-audiobook narrator/live announcer side of the VO perspective. Those job titles are more straightforward compared to any job title involving that VO word.

Here are some of the over 30 responses (shared with their permission) on Facebook:

From the marketing  perspective…

To the functional and straightforward…

To what others call us…

These are great responses, but they vary widely which made me think… What if I asked this same question in a more measurable way to get get some more clear cut results?

So that’s what I did. Using Survey Monkey, I created a quick, 2 question long survey. I came up with as many different names as possible for us VO people who speak into a microphone for a living while also putting in any options people had come up with on Facebook and other places. Respondents could also respond with their own titles if I didn’t have their option on the list. I did NOT add narrator or announcer, because like I said before, (in my opinion) they are both pretty self-explanatory and straightforward. The biggest confusion we have in naming ourselves involves some form of the word “voiceover” and involves things OTHER than audiobooks or live announcing.

Which leads me to the next question of the survey which may be bigger than the first… How do we spell that word? Voice over? Voiceover? Voice-over? So, I added that question as well.

Before I share the results, I need to be candid about the strengths and weaknesses of a survey like this.

1. Sample Size – Survey Monkey (the free version) only allows for 100 responses. While this is a pretty good chunk of answers, there are many more VO people out there. This sample size may not be big enough to get an accurate assessment of what we call ourselves.

2. Sample Population – I shared this question on Twitter, LinkedIn, Facebook, and anywhere else I could think. It was not randomized like it should be (ideally). However, this was the best way to reach a lot of people quickly for this “unofficial” survey. The vast majority of VO people did NOT even see this survey. Plus, it is biased toward those who use social media which could influence the results as well. Also, all of these answer may not actually be VO people. This was the trickiest part, because I wanted to keep this anonymous but wasn’t sure how to guarantee that respondents were VO people without actually saying who they are. That’s where we need to just trust that those who answered this are, in fact, who they say they are.

3. Confirmation Bias – I also went about getting these answers in a roundabout way by asking this question on an open forum like Facebook before asking for a more confidential response in a survey. Therefore, the answers you saw above may have influenced the answers those taking the survey gave, because they may have been trying to “fit in” to what others were saying or were just influenced by others’ responses. I hope that’s not the case, but it’s definitely a possibility.

1. Measurable Answers – Unlike Facebook, I was actually able to give specific, 1 answer options for people to choose from instead of having more of an open-ended question. This allowed for some measurable, specific results.

2. Sample Size – On the other hand, this sample size is actually pretty good for a survey like this. In the psychological research community, many studies have much smaller sample sizes than this. It may actually be a significant sample size.

3. Anonymity and Confidentiality – With this survey, both the respondents and I are unable to see who wrote what. This may be able to counter-act the confirmation bias I talked about before. This makes the responses both anonymous and confidential which promotes more honest responses.

With all of this in mind, let’s take a look at the results: 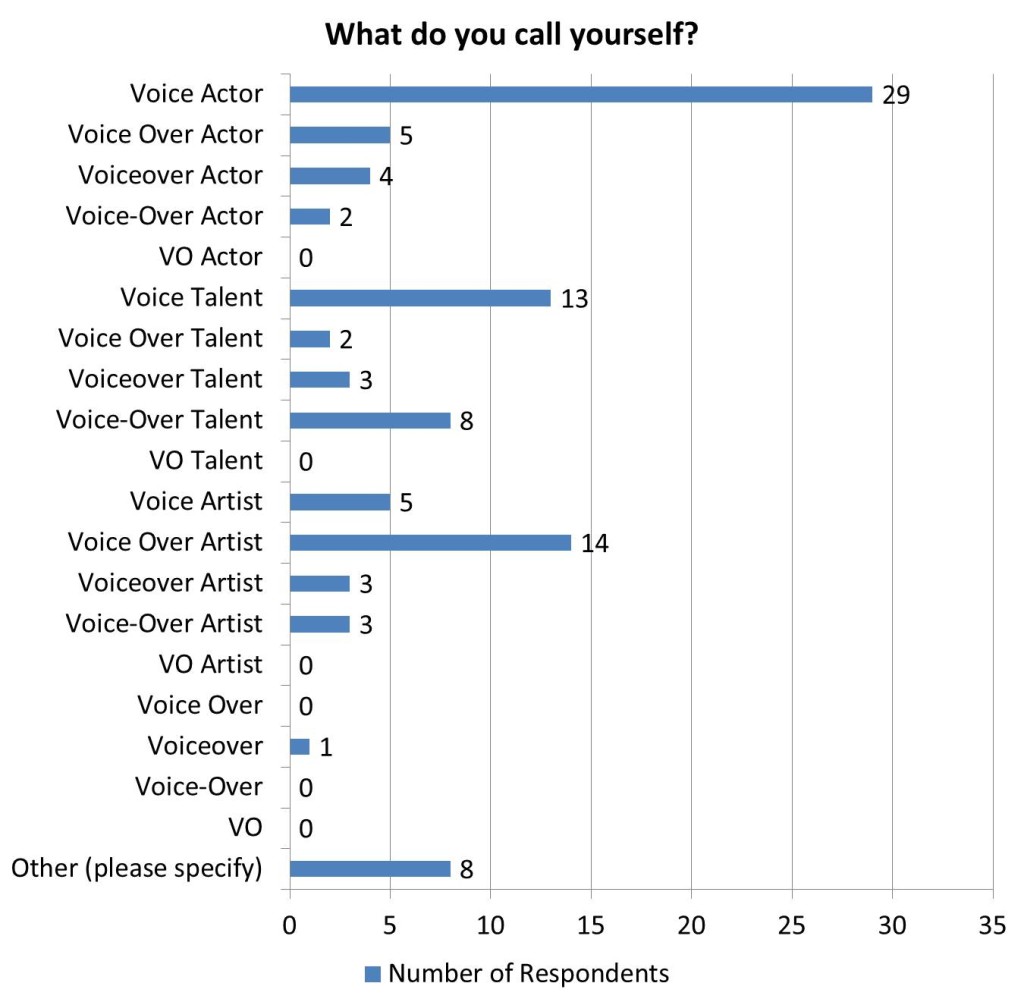 1. We Don’t Agree – This was pretty evident before I even had this poll and probably before you saw these results, but now we have some official results. People vary across the board.

3. Voice Actor Seems Like The Way To Go – I think it’s safe to say that we can “somewhat” agree on Voice Actor. However, there are more people who call themselves something else OTHER than Voice Actor than who actually use Voice Actor. p.s. I was 1 of 2 who called themselves Voice Over Talent. Should I be ashamed? Yikes… 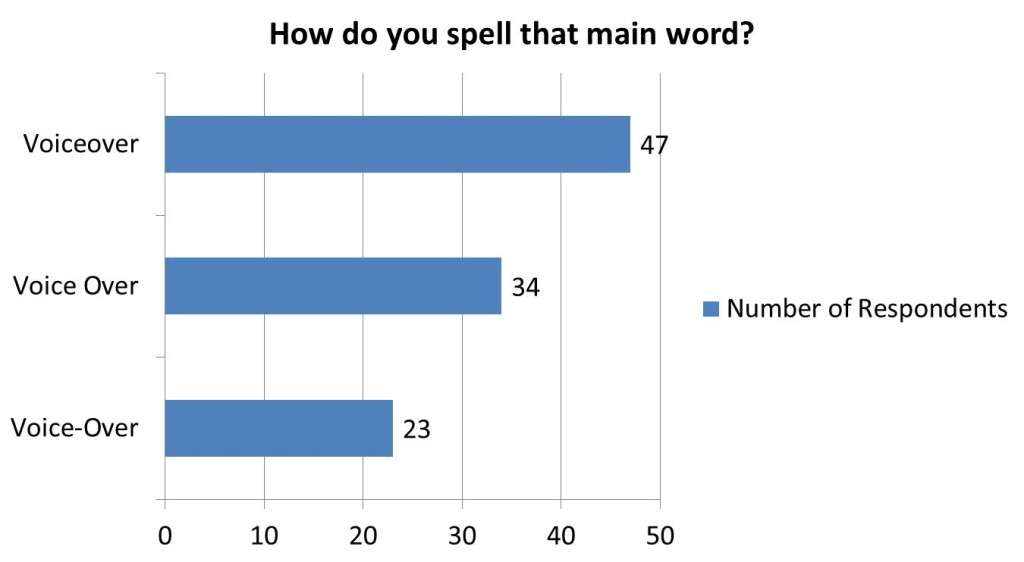 -“Woud never use that term in audiobook realm.”
-“VoiceOver”
-“I use all three, but since I’m unsure of the correct spelling I just go with whatever everyone else is using at the time.”

**Somehow this second question received over 100 responses even though only 100 were allowed.**

1. We Still Don’t Agree – This one is even more spread out. Voiceover is the majority answer here but not by a significant margin. And again, there are more people who spell it some way OTHER than Voiceover than who actually spell it Voiceover.

2. What Others Call Us Matters – Honestly, what matters most is what people are looking for online or in other places. Like Cristina Baker Woods said above, it’s more important that potential clients can find you via Twitter, on search engines, and in other places.

3. I’m Not As Off – Unlike the last poll, I’m at least in the realm of popular answers by spelling it “Voice Over.” 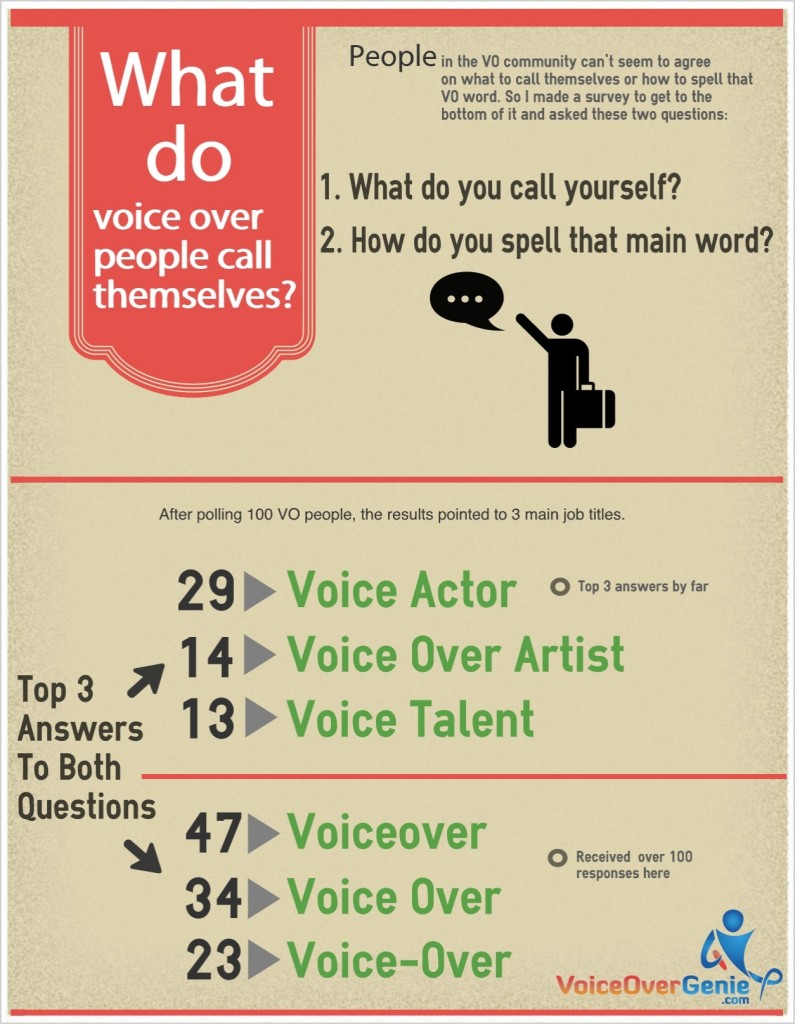 If it were up to me, I would have it so everyone was called the same thing. And we would have a definitive definition we could use at parties to tell other people what we do. (That’s actually a good idea for a future poll/blog post.) However, we do so many different things for so many different people that it would be hard to peg down a specific name. Plus, this variance allows for more of a variety in search engines like Google which helps when competing for keywords. (I will get into keywords another time if you don’t know what I’m talking about.) And we are creative people, so it’s fun to come up with our own names.

In the future, I am going to be doing a poll with voice seekers (production companies, agencies, etc.) to see what they call VO people. This poll is going to take longer, but I am very interested to see how it varies from what we call ourselves. Although, as well-known and respected Voice Actor (I used it!) Dave Fennoy says:

How do these results compare to your answers? Do you think we should have one word or phrase that everyone uses? Share your feedback and comments in the section below.

4 Comments on “Official Poll Results: What Is Our VO Job Title?”